IWGB recently signed up to support a national campaign to create parental pay equality for those classed as self-employed. Many of our members are currently mis-classified as self-employed or run self employed businesses as well as their ‘main’ job, so this is very relevant to our membership. The text of the letter is below. You can check out the website here, along with a petition – please sign it! http://www.parentalpayequality.org.uk.

To:
The Right Hon Theresa May MP
Prime Minister
10 Downing Street
London
SW1A 2AA
Dear Prime Minister
We are writing to ask you to change the eligibility criteria for Shared Parental Pay to include self-employed parents. This was raised in last week’s Prime Minister’s Questions by Tracy Brabin MP, and you promised to look into the matter further.
Self-employed parents and adopters are currently not eligible for Shared Parental Pay
(ShPP). The system of Maternity Allowance for the self-employed places the entire burden of childcare onto the mother, and offers no paternity or shared parental benefit for self-employed fathers or same-sex partners wanting to share childcare.
Self-employed mothers claiming Maternity Allowance have none of the legal protections
afforded to employees when they go on maternity leave, so the flexibility to share childcare and stop and start their maternity pay in order to maintain their business becomes even more crucial. We believe that in 2017 gender-equality is a fundamental right, not an optional extra reserved for those in traditional employment.
With the 4.8 million self-employed people in the UK (15% of the workforce) only expected to increase, the number of families affected is significant.

We would like to see ShPP implemented for all self-employed parents, as it would allow
self-employed men and women the flexibility to successfully run their businesses and care for their families. As ShPP is paid at the same rate as Maternity Allowance, and there would be the same number of qualifying maternities, we do not envisage there being a significant cost increase.
We look forward to your response

The results are in for the ICE Ballot – with a turnout of 67%, all the candidates on the IWGB slate for UoLIA were elected. Your UoLIA ICE representatives are:

Thanks to everyone who voted!

Don’t forget to vote in the ICE elections – the ballot closes tomorrow! — November 7, 2017

Don’t forget to vote in the ICE elections – the ballot closes tomorrow!

If you haven’t voted already, please make sure to vote in the current Information and Consultation of Employees elections in UoLIA, before the ballot closes tomorrow.

You should have received an email and reminder from ‘Online Voting’. Links and instructions are in there. You get to vote for FIVE people – don’t miss out!

The IWGB are standing FOUR candidates – Catherine Morrissey, Nic Charlton, Rebecca Dooley and  Bill Kelliher – please vote for us to make sure the new forum is a strong alternative voice for UoLIA staff.

Over the last few years you’ve seen the efforts we’ve made in fighting for London Weighting and now to have outsourced staff brought in-house. We want the chance to make similar progress on behalf of everyone who works in UoLIA, so please give us your support.

The first ICE meeting with UoL management will be on 27 November. If elected, we’ll be in touch straightaway to find out what issues you think should be on the agenda.

Please give either Nic, Rebecca, Bill or me a shout if you have any questions.

IWGB serves notice of industrial action to Cordant at UoL — 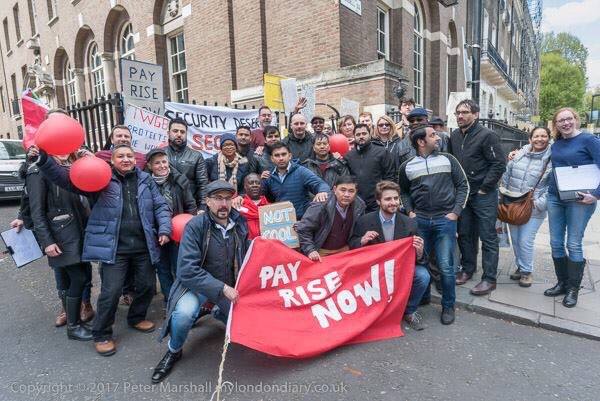 IWGB serves notice of industrial action to Cordant at UoL

IWGB has served Cordant Services with notice of industrial action on Tuesday 21 November. Our members among the porters, postroom staff and security officers at the University of London will be out on strike, due to our dispute with Cordant over pay differentials.

This strike coincides with our day of action for the campaign to end outsourcing at the University of London. Please join us – there’s a Facebook page for our protest that day here: https://www.facebook.com/events/896148920559566/

If you can’t make it on the 21st, please consider taking five minutes to write to Vice Chancellor Adrian Smith, letting him know what you think of UoL and Cordant’s treatment of outsourced workers: http://mailchi.mp/8d61a9f1968f/help-outsourced-workers-at-the-university-of-london-9703

You can keep up to date with the latest campaign news here: https://www.facebook.com/JusticeforUOLWorkers/

3 November: The Independent Workers’ Union of Great Britain (IWGB) is balloting cleaners at the Royal College of Music (RCM) to strike, following proposals that could result in most of them being made redundant.

Cleaning contractor Tenon FM, which was recently awarded the contract to provide cleaning services at the RCM, has unilaterally and without consulting the cleaners decided to cut the hours in half and change the times of the shifts. The new shifts are at times when most of the cleaners have other jobs, meaning that they will not be able to accept them and would consequently be dismissed.

Not only is the move cruel and arbitrary, but is potentially unlawful under the UK’s TUPE regulations 2006, as it comes immediately following a transfer from the previous cleaning contractor. The IWGB is exploring a legal challenge.

These are employees of long-standing, many of whom have served the college for more than five years and are already underpaid, as they work unsociable hours for no additional recompense.

The school and Tenon FM have ignored repeated attempts by the the union to sit down and discuss the issues, leaving the workers with little option but to launch a collective grievance and go on strike.

“It’s deeply unfair that after five years of loyal service, from one day to the next they just take away my job,” says Wilson Ayala Romero, cleaner and IWGB rep at the RCM. “I clean their offices, I clean their classrooms and I am as much an employee as anyone else who works here, so I should be treated with the same respect. Despite that, they keep on treating us cleaners as if we were second class employees.”

These cleaners have a long history of suffering at the hands of the companies contracted out by the college to provide cleaning services. The IWGB was forced to launch legal proceedings against the previous cleaning contractor, Kingdom, after it unlawfully withheld thousands of pounds in wages from cleaners at the RCM, the Royal College of Arts and Heythrop College. Following a process that lasted over a year, the company ended up settling in July, a day before the hearing was set to start.

“It is disgraceful that such a prestigious institution as the Royal College of Music treats its lowest paid and most vulnerable workers in such an arbitrary and unjust fashion, all the while hiding behind Tenon FM,” says IWGB University of London branch secretary Danny Millum. “We will not tolerate this ill treatment of our members and until the RCM reverses the decision the campaign of strikes and protests will only escalate.”

The problems faced by the cleaners at the RCM are symptomatic of the business model of outsourcing, where employers can shirk their responsibilities towards their workers by not employing them directly and instead having them work for a facilities management company or an agency.

The IWGB is campaigning to end outsourcing at the University of London, with a protest planned for 21 November at Senate House.

Photos of an impromptu protest at the Royal College of Music that took place on Tuesday can be found here.

Write to Adrian Smith telling him what you think of outsourcing! — November 2, 2017 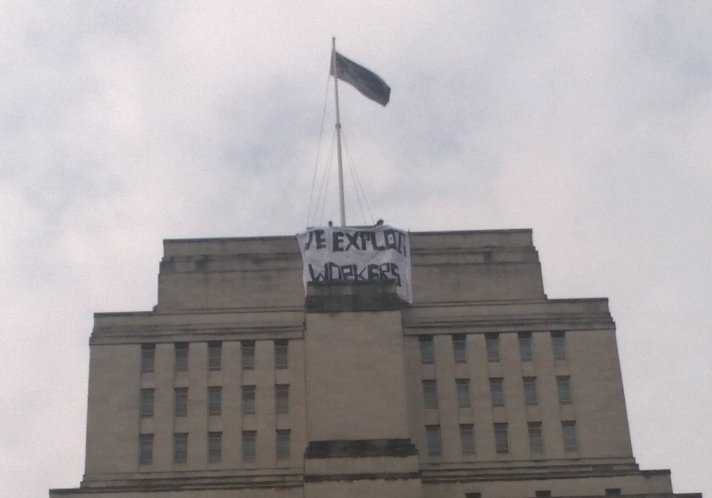 Write to Adrian Smith telling him what you think of outsourcing!

The IWGB’s campaign to bring outsourced workers at the University of London back in-house is in full swing. In the last few weeks we have had a massive protest, flyering outside Senate House, several campaign videos and a letter writing campaign with emails from high profile individuals and organisations, including John McDonnell MP, Jonathan Bartley (co-leader of the Green Party) and War On Want.

More information on the campaign can be found here and here.

Now we are asking you to take a couple of minutes of your time to help these workers end the discriminatory work practices that mean they suffer from worse terms and condition than those directly employed by the university. All you need to do is copy the email below and send it to Vice-Chancellor@london.ac.uk cc’ing uolbackinhouse@iwgb.org.uk .

This small act will go a long way to help ensure a better future for these low-paid precarious workers.

I’m writing in support of the Independent Workers’ Union of Great Britain’s (IWGB) Back In-House campaign.

It is truly disgraceful that you continue to shirk your responsibilities towards your workers by maintaining a two-tier workforce, with outsourced staff receiving far worse terms and conditions than their colleagues that are directly employed by the university.

Your continued refusal to engage with the union that represents the vast majority of your outsourced and in-house employees is a further sign to how little you value your staff.

That is why I am joining the IWGB in demanding that you immediately:

38 Degrees and Sisters Uncut have started a petition to save a womens’ hostel in Whitechapel – we’d encourage you to read and sign it! You can sign the petition here.

Tower Hamlets council is evicting over 100 vulnerable residents from Hopetown women-only hostel in Whitechapel. The council is closing the hostel and cutting women-only hostel beds in the borough by one third. They have issued eviction notices and are forcing residents to move to mixed gender accommodation or sending them miles away out of borough.

Don’t forget to vote in the ICE election!

If you work anywhere in UoLIA, don’t forget to vote in the election to select UoLIA reps for the new staff forum.

The IWGB are standing 4 candidates – Catherine Morrissey, Nic Charlton, Rebecca Dooley and  Bill Kelliher – and it would be great if you could vote for them AND please encourage your colleagues to do the same.

You’ve seen the efforts we’ve made in fighting for London Weighting and now fighting to have outsourced staff brought in-house – we want the chance to do the same thing on behalf of people who work in UoLIA.

You should have had an email with 5 votes – if you can vote for the IWGB candidates and ask others to do the same that would be fantastic!

Hope that makes sense – just let Catherine (catherine.morrissey@london.ac.uk) know if you have any questions.

Voting runs until this Wednesday 8 November! 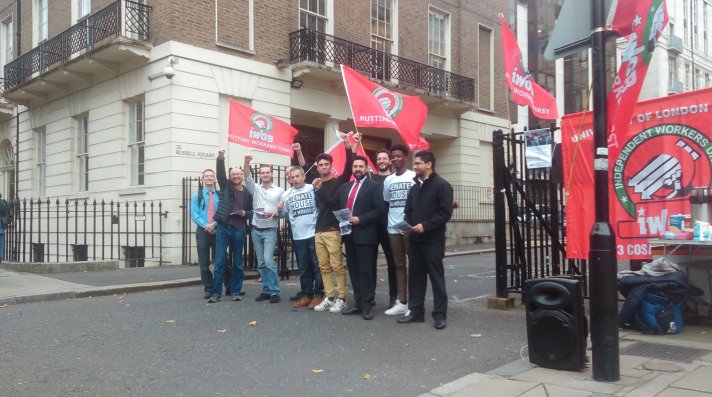 Last week we handed out a series of flyers with stories from outsourced workers at the University of London – some anonymised – which described their experiences at the hands of the various companies that have held University of London contracts over the years. In case you missed them, you can download the collection of flyers here as a PDF: Outsourcing Flier_03