Hundreds of UCL cleaners, porters and security to vote on strike action over pay and conditions — November 6, 2019 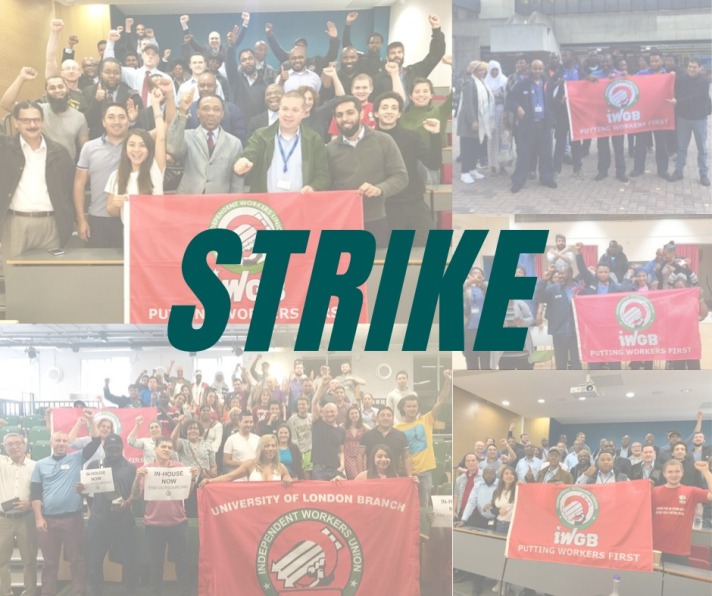 Hundreds of UCL cleaners, porters and security to vote on strike action over pay and conditions

9 October: The Independent Workers Union of Great Britain (IWGB) is to ballot cleaners, porters and security officers for strike action at London’s largest university, UCL, in what could be the biggest strike ever of outsourced workers in UK higher education history.

The IWGB will be balloting almost 300 workers over their terms and conditions, as part of the union’s campaign, launched yesterday (8 October), to end outsourcing and zero hours contracts at UCL. The strike ballot will specifically demand the outsourcing companies that manage the security contract, Axis, and the cleaning contract, Sodexo, put cleaners, porters and security officers on the same terms and conditions as UCL’s direct employees. The results of the ballot are expected on 5 November.

Specifically, while direct employees can receive up to 26 weeks of pay when they are off sick, outsourced workers are on the statutory minimum, which means that they get no pay on the first three days they are off sick, after which they are entitled to £94.25 a week. This means that many workers chose to work while sick, rather than risk losing a day’s pay. (See comparisons of other conditions in notes below)

IWGB University of London branch chair and former UCL cleaner Maritza Castillo Calle said: “UCL would not be able to function without its cleaners, porters and security officers, however for years the university and its contractors have been happy to treat them like second class workers. They are overworked, underpaid and mistreated, while UCL is happy to look the other way when issues are raised about the abject failure of its contractors to treat people with basic dignity. We gave UCL a clear deadline by which to present a plan to end outsourcing which it failed to abide by. Now we are left with no option but to strike.”

Over the last year the IWGB has also documented a number of severe management failures and discriminatory practices by the outsourcing companies.

The IWGB brought complaints on behalf of 30 Axis security officers that were owed over £15,000, when the company failed to properly pay their holiday pay over a period of three months, between December and February. Following these formal complaints by the University of London branch secretary, the money was paid, but there have been other instances of non-payment of holiday pay since.

In March, Sodexo tried to introduce a biometric time management system, which would require cleaners, the vast majority of whom are migrant workers, to have their fingerprints scanned when logging in and out of work. Following a collective grievance, and protests by the IWGB and its members, the introduction of this discriminatory system to monitor workers was called off.

In September, the IWGB launched a collective grievance on behalf of 30 cleaners and porters who complain that managers assign them an excessive amount of work, resulting in significant levels of exhaustion and stress. Attempts by management to further increase these workloads have so far been stopped by the intervention of IWGB reps.

You can donate to the Strike fund: https://www.gofundme.com/f/ucl-outsourced-workers-strike-fund