Earlier this year, two outsourced security staff at UCL had to take time off work after each of them was badly injured outside of work. This has revealed just how poorly UCL supports its outsourced staff when they become sick.

One of these security officers, David Kikupi, has asked us to share his story so that his colleagues, friends, members of the UCL community and supporters of our campaign to end outsourcing are aware of just how bad the situation can get. 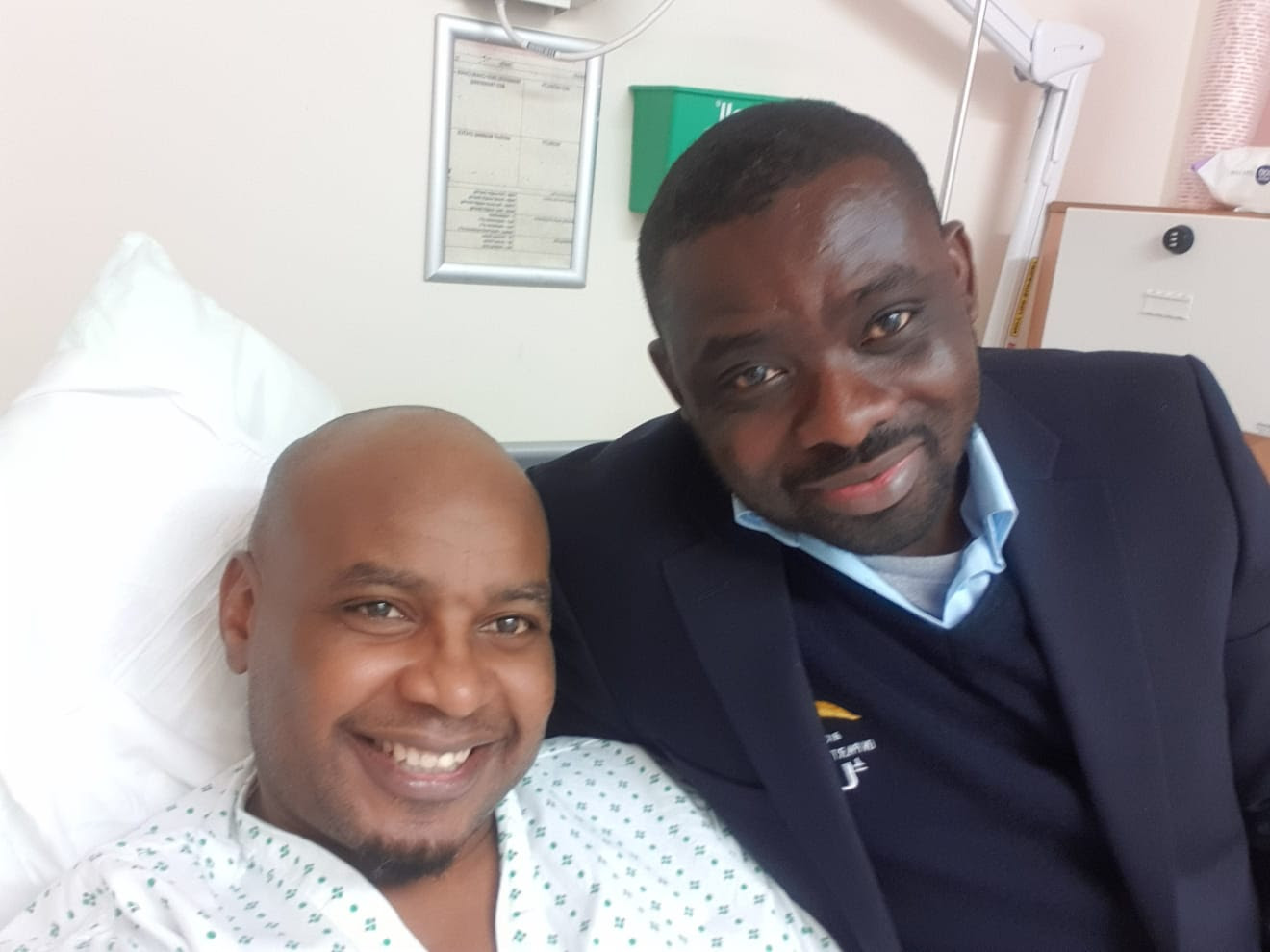 David in St Mary’s hospital with a colleague

A couple of friends from work asked if I would write a letter describing what has happened to me recently – what has kept me away from work. They said I should detail what happened, the effect it has had on my life, the difficulties it has caused me and what I feel about these experiences.

But first of all, a bit of background. My family is in Kenya. I came to the UK when I was 20 to build my life here. I’m now 42. The UK and London in particular, is my home. For just over 10 years now I have worked as a security officer at University College London. Firstly for one security outsourcing company, then when they left I chose to stay at UCL and take employment with the new security outsourcing company. Just as I have made London my home I see UCL as my place of work.

Early in December I travelled to Kenya to visit my mother and the rest of the family. It was while driving in Nairobi that I had an accident. A collision with another car that turned out quite bad. My foot was badly mangled and required major surgery to put it back together. It was clear from the start I’d be in hospital for a long time and would need many operations to repair the damage to the foot.

If this accident had happened in the UK, although serious, it wouldn’t have caused me the problems it has. The initial surgery was done in a Nairobi hospital. My fiancée and I were planning our wedding for this year in the summer of 2020. I had been saving up money for our wedding. In Kenyan culture the groom is often expected to pay a dowry for the bride and I had also saved money for this. The hospital treatment, unlike in the UK, had to be paid for. And although not expensive, it was completely unexpected. All the money I had saved got used for medical bills.

This meant a very difficult conversation with Pheliciah, my fiancée. A conversation I would have given anything not to have. Our wedding has had to be put off. Naturally, she was understanding, she’s not blaming me, it wasn’t my fault, but I cannot help feeling at times that I have let her down.

Because of my financial situation, the money I had was running out, and the fact my foot would need major reconstructive surgery, I got myself discharged from the hospital in Nairobi and got a flight to London. From the airport I went straight to Barnet Hospital, then transferred to St. Mary’s, Paddington, which is a hospital specialising in major trauma injuries.

Although I was prepared to pay the rent on my London flat while on holiday, I wasn’t prepared for all this time in hospital and with funds running out I have had to let my flat go because I just cannot pay the rent. As an outsourced worker for UCL, I received a few weeks of company sick pay from the outsourcing company, after which I do not get anything other than the minimum statutory sick pay of £94.25 per week. Nowhere near enough to cover my rent, so I am now effectively homeless. Some of my colleagues from work helped me get my belongings into storage, otherwise I don’t know what I would have done. When the hospital does discharge me, they aren’t going to put me on the street, they have said they will arrange a room in a hostel.

I have my pride and this is a big come down for me. Out of a clear blue sky something completely unexpected happens. Something no one would plan for. My whole life has been turned upside down. I had my own flat in London, I had money in the bank and best of all, I was looking forward to my upcoming marriage. Now everything is up in the air. I find myself in a place I wouldn’t wish on my worst enemy. As I said, I have my pride, and I know I will get back on my feet. I’ll get back to work, then I’ll stop in the hostel long enough to get some money saved, get a flat, get everything back on track.

The thing I have learned from this is just how precarious life can be. Everything was going well for me and life couldn’t have been sweeter. And then, without warning, it all turns to mud.

But what is really galling is having spent over ten years of my life working at UCL, often 60 hours or more in a week, when something goes wrong, you realise that ultimately you are not part of the club. It doesn’t matter how the staff, in the building where I now work, try to make you feel part of the team and how much you are encouraged to identify with UCL, when things turn bad you are not part of the team at all. That’s when the reality of your employment situation hits home. Some piece of bad luck could happen to any of us UCL outsourced workers at any time and you find yourself in desperate trouble, as I have done.

UCL has employed security staff directly in the past, you’d wonder why they cannot do it again and give us security equal access to basic rights such as decent sick pay. It would have made such a difference to me.

David is now out of hospital and is staying with a relative while he recovers. He has been off work for over 2 months now and it will likely take several more months before he recovers.

David has received a few weeks company sick pay from UCL’s security subcontractor Axis at his normal rate of pay, but has now moved onto statutory sick pay at a much lower rate. This means he will have to support himself on only £94.25 per week.

However, in both David and his colleague’s cases, this would mean that they will not receive these entitlements until July. As a result, they are facing severe hardship, with neither of them able to earn their usual income.

For this reason, the IWGB union has written today to UCL’s Provost Michael Arthur and the UCL Council to ask them to speed up the implementation of improvements to sick pay for outsourced workers and to ensure that both David and his colleague receive full sick pay immediately.

This issue of poor sickness benefits is a key plank of our union’s campaign for equality and an end to outsourcing at UCL. UCL’s direct employees receive significantly better sickness entitlements than outsourced staff. It is only right that UCL’s outsourced staff receive equal terms and conditions as direct employees and UCL should act now to make improvements and end outsourcing.

In the Autumn, the university stated publicly that they disapprove of the deterioration of terms and conditions that have taken place over the years for UCL’s outsourced workforce and they wish to rectify this. Right now, two valued members of staff are suffering as a result of that deterioration. UCL has promised to improve this situation in a few months time in July, but that will be too late for these two members of UCL staff, who are being left in an extremely precarious position as a result of UCL’s policies.

There is no good reason why the improvements UCL has promised should not be sped up and implemented right away. UCL has the financial resources at its disposal. And logistically it is not complicated to extend decent sickness benefits to staff as the processes for (inadequate) company sick pay are already in place.

The only reason UCL management wishes to delay delivering these improvements is to slow down the campaign led by UCL’s outsourced workers for full equality and an end to outsourcing.

But UCL’s delay tactics must end now, there is simply too much at stake. The sick pay issue has ramifications beyond the fight for fair and just treatment for David and his colleagues. With the increasing risks posed by the spread of Coronavirus in the UK, it is vital that ALL staff have the entitlements and benefits they need to be able to take leave if they get sick. Poor conditions for outsourced staff will impact everyone in the UCL community.

UCL must act now to improve sickness entitlements for all outsourced staff.

If you support our call for decent sick pay for all staff at UCL, please write to the Provost of UCL and to the UCL Council here:


Many thanks for your support!