I am writing briefly in response to the email below, the tone of which I am afraid I find disappointing.

While I completely agree that professionalism, respect and mutual trust and indeed laudable principles on which to base an institution’s culture, I don’t see how that can be squared with the reality of the University of London.

Currently, predominantly BME outsourced workers at the University suffer much worse terms and conditions than their mostly white directly employed counterparts. This is blatant discrimination and incompatible with the principles you outline.

In addition, the main outsourcing company Cordant have been allowed to employ first a manager that was an open supporter of the far right, and now another manager who has been accused by no fewer than 3 women of blatantly racist, sexist and homophobic behaviour and yet remains in post. These women continue to work in fear on a daily basis, a fact difficult to square with any declaration that no member of staff should work ‘in an environment where they feel uncomfortable’.

Finally, while it’s definitely a positive development that you have met with the cleaners, it is worth bearing in mind that they have just voted 100% yes for strike action following the failure of the University to engage with them.

It is these predominantly middle-aged Latina cleaners, along with your own security officers, who will be forming the bedrock of the 30 October demonstration. When UCU struck earlier this year for 14 days the University continued as usual with no additional security – yet when low-paid migrant workers take action this is cause for a massive lockdown and pre-emptive yet vague accusations of intimidation. This can only be seen as further double standards.

As stated in numerous emails, the IWGB as the chosen union of these workers remains open for negotiation. All of our offers have been ignored. Until the University engages in dialogue to end its discriminatory employment practices there will continue to be strikes and demonstrations, and we believe it’s clear the responsibility for any disruption clearly lies with the side that refuses to negotiate.

From: Fiona Bernardone On Behalf Of Vice Chancellor
Sent: 26 October 2018 10:11
To: Central-University <central-university@london.ac.uk>
Subject: Message from the Vice-Chancellor

I have now met with most of the heads of member institutions and I have been impressed by their support for the University, and their wish to work closely with us. They all see membership of the University as a benefit to their institution. This is important when considering the University of London Bill which is currently passing through Parliament. The Bill establishes member institutions as universities in their own right. It was debated in the House of Commons last week and successfully passed through its second reading and now progresses on to the Bills Committee. Each Head sees the Bill as a means of consolidation within the federal university.

Evidence for this came from a recent visit by Chris Cobb and I to Paris. We were invited by Professor Ed Byrne, President of KCL and Deputy VC UoL, to attend the signing of a preliminary agreement between KCL and the Founding Institutions of the University of Paris for a strategic partnership. Ed was generous in his speech in emphasising UoL’s presence at the ceremony and the opportunities from closer working between the two federal universities. You will be aware of the University of London in Paris which I visited for the first time in the afternoon. It is an impressive building superbly located in the centre of the city. Our exploration with Member Institutions about how we may utilise this “asset in Europe” post Brexit has been met with considerable interest and positive proposals.

As you will have read, the Board of Trustees have firmly supported our plan for Facilities Management Services (intranet post here). I am conscious that this is a matter that has generated strong feelings, some of which have been expressed in communications directed at me and my executive team in a tone that I have found personally disappointing.

I am mindful of the planned demonstration on 30th October and of the feelings that some of you have expressed in relation to the impact of previous demonstrations at the University.  In this regard I would wish to echo the message expressed toward the end of the recent intranet post on this matter, that is, that I do not expect any member of staff to work in an environment where they feel uncomfortable.

My background as a doctor is one of professionalism, respect and mutual trust. I have previously worked closely elsewhere with colleagues and recognised representatives to foster a culture based on these principles. I will carry on with this approach here at UoL. I am continuing to visit the University’s departments and meet staff to enable as many as possible to connect with me directly. I have come in early to Senate House on a number of occasions to meet the cleaners and porters. I am constantly impressed by everyone’s very evident loyalty and commitment to the community of the University, whatever their background and would like to thank you all for the welcome you have given me.

One university should mean one workforce: it is time to end discrimination at UoL — August 15, 2018

One university should mean one workforce: it is time to end discrimination at UoL

Despite the wishes of the majority of its staff, the biggest strikes by outsourced workers in higher education history, support from high-profile politicians, and £700,000 wasted on extra security, the University of London (UoL) refuses to commit to ending its discriminatory two-tier workforce. Not even the acres of negative press nor the heartfelt pleas from outsourced staff, the majority of who are from BME backgrounds, have managed to make a chink in the armour of the university’s senior management team. 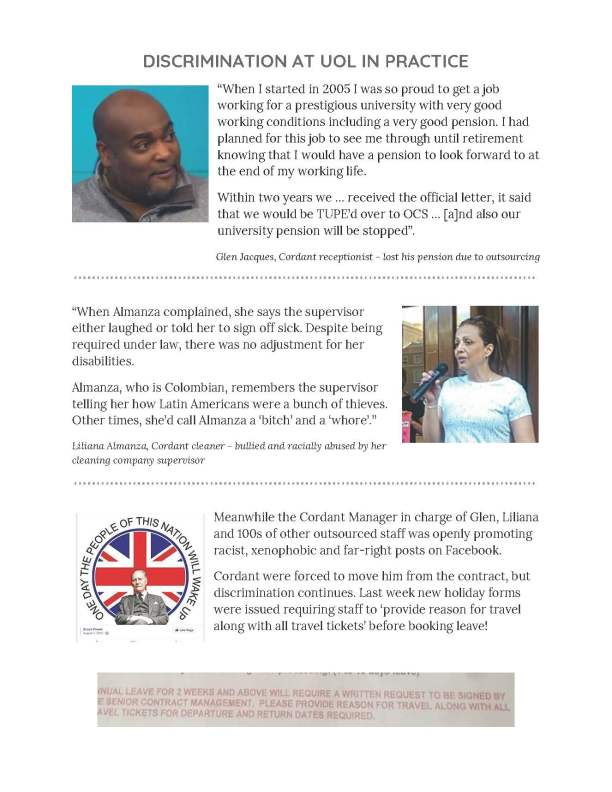 Incidentally, 80 per cent of the institution’s directly employed staff are white. And guess what? Unlike their outsourced BME colleagues, they have enviable pension arrangements and holiday entitlements, are entitled to sick pay and good maternity and paternity pay. Moreover, the university’s ‘dignity at work’ policy ensures they are treated with respect.

All of this point to institutionalised discrimination, and it is a disgrace.

Please email the university’s new vice-chancellor, Peter Kopelman (vice-chancellor@london.ac.uk) and ask him to end discrimination at UoL and bring workers in-house by June 2019.

Open letter: ending outsourcing at the University of London — May 4, 2018

Open letter: ending outsourcing at the University of London

I am writing following last week’s massive strike and demonstration by outsourced workers to call on the University of London (UoL) to resolve this issue once and for all.

As you must be aware, the situation at UoL has now become untenable.

The year-long series of strikes, endless negative media and social media coverage, petitions from in-house staff and occupations by students have left the university’s reputation in tatters.

We are now at a point where the campus is on perpetual lockdown, and the university is spending hundreds of thousands of pounds on additional security whose ID and bag searches are alienating staff and visitors alike. Meanwhile, outside the university gates MPs including the Shadow Chancellor line up to condemn the UoL stance.

And all of this is merely to perpetuate an obvious injustice – namely the continued discrimination in terms and conditions against one group of predominantly BME [black, minority and ethnic] staff.

As an aside, I know that one of accusation levelled against the IWGB is that it is in some way ‘extreme’ or ‘militant’.

In fact, our members’ behaviour has been consistently reasonable – how would you like it if you were given much worse terms and conditions than your in-house colleagues, ignored when you attempted to raise this issue, told that the university would talk with neither you nor your chosen representatives and then have your entirely peaceful strikes and protests policed in a completely different fashion to those of your mostly white UCU [University and College Union] colleagues?

Furthermore, I have on their behalf raised a series of issues relating to the behaviour of the outsourced companies to which the University has simply failed to respond. What other option have they been left with to have their voices heard?

As such, the university must realise that the in-house campaign will continue to intensify until all outsourced workers are brought back in house under the following conditions:

Please watch this space for details of our May protest – it’s going to be a big one!

As ever, and to combat any further accusations of unreasonableness, the IWGB remains open to direct talks over the implementation of the in-house process.