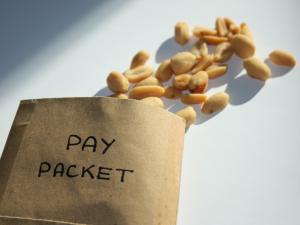 We’re kicking off 2016 by thinking about PAY at the University of London – specifically how to make sure that in 2016 we get a proper pay rise, rather than the miserable 1% that finally dribbled into our pay packets at the end of November.

Even the increase in London Weighting only amounts to an average of £341.50/year over four years (before tax!) which hardly offsets the huge rental and transport increases we have to cope with.

So what do you think? Do we deserve better than this? If so, we need to start campaigning early for a substantial rise this year – let’s push for 5%. Our thinking at the moment is to make posters and fliers, write to the University, circulate a petition and generally up the ante BEFORE any negotiations even begin.

HE pay is decided nationally, BUT:

We’ll need lots of members to help if this is going to work – though what more motivating cause is there than our own pay? 😉

Please get in touch with Danny (danny.millum@sas.ac.uk) or Catherine (Catherine.morrissey@london.ac.uk) and come to the next branch meeting on Friday 22 January at 12.30 to help organise the campaign!