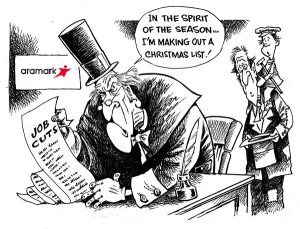 UPDATE: If you would like to help Aramark staff facing redundancy this Christmas, please write a letter of objection to University Pro-Vice Chancellor of Operations Chris Cobb (Chris.Cobb@london.ac.uk)and Vivienne Shinner of Aramark (Shinner-Vivienne@aramark.co.uk) and sign our petition on the 38 Degrees website – http://you.38degrees.org.uk/petitions/stop-the-redundancies-of-aramark-staff-at-the-university-of-london.

I am writing to express my concern about the planned redundancies among Aramark staff at the University.

I understand that the reason given for this is that hospitality revenues have been falling – and yet at the same time new zero-hours staff are being taken on, which suggests instead that this is an attempt to get rid of staff on full-time contracts.

In addition new catering outlets are due to open as part of Programme Beveridge early next year. It would seem sensible to defer this restructure until then, allowing staff to be relocated and avoiding redundancies.

I must say that in an increasingly faceless world of customer service I really value seeing my colleagues at the North Block café each morning.

Our branch secretary Catherine Morrissey has just submitted the union’s response to the planned restructure and job cuts by Aramark in Senate House.

See below for the full thing. Our branch meeting this week (12.30, Friday)  will be held in solidarity in the Common Room next to the cafe, and we plan to flier afterwards – so please come along and support our colleagues!

Aramark’s regional Manager Vivienne Shinner announced in a staff meeting on 8 November 2016 that Aramark intends to ‘restructure’ a pool of ten people at the University of London site, resulting in the loss of three permanent jobs in catering at the University site.

This pool includes only staff on contracts with guaranteed hours. No zero-hours staff or their posts have been included in the pool.

Aramark’s stated justification for the intended restructure is falling revenues at the Senate House site due to a drop in catered hospitality bookings.

It should be noted that hospitality bookings are managed by the University’s Conference Office, which is staffed by direct employees of the University.

It has been claimed by Aramark managers in meetings with affected staff that the ‘pressure’ to make redundancies has come from the University itself. To date this assertion has not been confirmed by the Conference Office Business & Development Manager.

IWGB believes redundancy should be an absolute last resort and should not be considered until all other options have been tried and failed.

In this case IWGB does not believe Aramark and the University have done all they can to avoid redundancies. There are several grounds on which it can be shown that this restructure is precipitate and has not been properly managed, detailed below.

IWGB calls on the University of London and its subcontractor Aramark to halt these plans for one year, to allow time for the many possible solutions that would enable affected staff to continue their employment to be tested.

Further, IWGB believes that a failure to do so could result in any redundancies made under this process being challenged in court as unlawful and will give its full support to all staff wishing to take such a case forward.

We very much hope that this will be unnecessary and that suitable employment can be found for the affected staff, within the University site itself.

Grounds on which IWGB and affected staff believe this restructure is unnecessary and potentially illegal are as follows.

Suitable alternative employment on site or nearby is being withheld

The consultation has not been genuine or appropriate

The redundancies are not genuine and are therefore illegal

Claims about falling revenue have not been evidenced

Other ways to cut costs have not been appropriately trialled and considered. Staff have come up with several suggestions about how the alleged problem of falling revenues can be addressed, for example:

IWGB believes that the above is overwhelming evidence that there is no need for any redundancies among Aramark staff at the University of London site.

IWGB calls on Aramark to halt these proposed redundancies immediately.

IWGB calls on the University of London to step in publicly, to prevent its collusion in the discriminatory practices against ethnic minority staff on its site and against the attempted constructive dismissal of a longstanding member of staff.