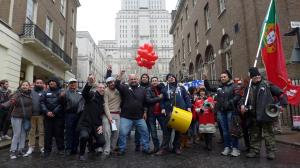 Branch Chair Henry Chango Lopez said that the company had left his union with no option, and stated: ‘I can only stress again our (and ACAS’s) bewilderment at BBW’s failure thus far to negotiate with us on any of these issues AND to reiterate our willingness to participate fully in meaningful talks to resolve this dispute’.

STOP PRESS: Thanks to thousands of pounds of donations to the strike fund, all workers will be fully compensated for wages lost in the strike action on 27 and 28 November. Please come to the IWGB office in ULU on Monday 16 / Tuesday 17 December to claim your compensation, or contact Branch Secretary Jason Moyer-Lee (JasonMoyer-Lee@iwgb.org.uk / 07771783094).

PLEASE HELP! With more strikes announced, we desperately need to continue to raise money for the strike fund! Please donate here if you can, and please share! Your donations will make the difference between success and failure!